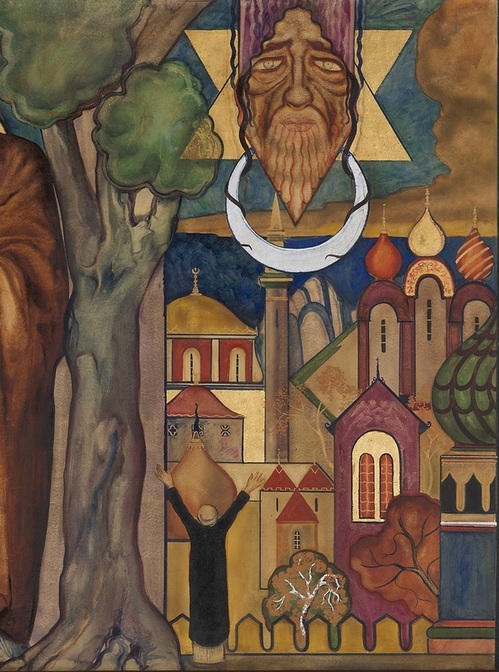 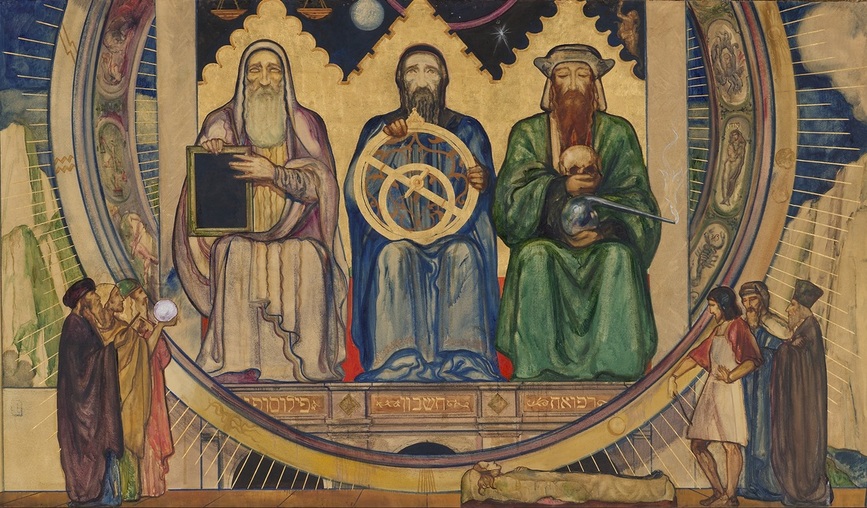 Mural Description From the Lectures of Rabbi Edgar F. Magnin, 1929-1930: Top Image: The Moslem Period in Jewish History: The figure above represents the spirit of Judaism...Adhering to (the) star os the Crescent or (symbol of Islam.) Synagogues patterned after the mosques with their domes and towers dominate the foreground...
Image below: Contribution of the Jew in the Middle Ages: Three figures are depicted, the first one holding an empty slate, typifying philosophy. Above him are the scales signifying truth and justice. The center figure in blue holds an astrolab. Above him is a sphere and an ark, also a star. He symbolizes astronomy or astrology...The figure in green on the right stands for medicine, green was the color worn by physicians in the Middle Ages.The men on the left...and those are the right are all seeking knowledge...."
Read in Primary Text: Understanding Jewish History 1, Sol Scharfstein, Ktav, 1996. Islam begins, 570 C.E., p. 126-127, The Golden Age, 10th-12th Century, pp. 136-137; The Crusades, p. 144
Enduring Understandings:
Essential Questions:
Ideas to Discuss:

Activity #1: “In this Time…" Jewish Medieval Life Quote Strips
This activity is designed to spark students interest in the "Golden Age" of Jewish life in the Middle Ages. Upon entering the room each student will be given a quote that illuminates an aspect of Jewish life, history and culture during this time.
Read aloud: "Students whose quote tells about..."
Format adapted from Expeditionary Learning, NYS Common Core ELA Curriculum Activity

Medieval Jewish and Islamic Art from Spain and Iberia
As we have learned, there was a great deal of sharing of ideas and of art during this time in Spain and Portugal and the surrounding regions on the Iberian Peninsula. Look closely at these examples of Jewish and Islamic art and architecture. What do they share in common? What is different?
Activity #2: My Heart is in the East: Yehuda HaLevi--A Medieval Jewish Poet Between Worlds 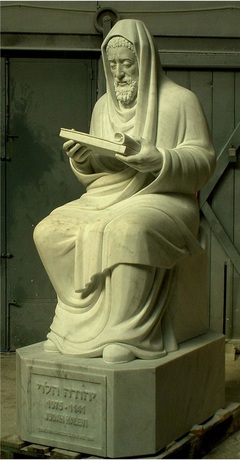 Statue of Yehuda Halevy, Ralli Museum, Caesarea, Israel.
Print out this bio of Yehuda Halevi for students to read and explore together. The text is printed below as well. Read the poem My Heart is in the East together and discuss using "Questions to Explore" below.

My Heart is in the East: Yehuda Halevi--A Medieval Jewish Poet Between Worlds
One of the greatest Medieval Spanish Jewish poets was Yehuda Halevi.  He was born in Toledo, Spain in 1085 C.E.  and died in Jerusalem after 1140. Although Yehuda chose medicine as his profession, he showed an early  love and talent for poetry. He studied the Arabic and the Spanish poets of his time, yet he was inspired to write in the Hebrew language of the Bible.

During this time, Jews played a unique role in Moslem Spain moving between Jewish and Islamic cultures, spreading ideas which influenced the creation of new forms of philosophy, art  and literature. Both Arabs and Jews were lovers of literature and collectors of books. Writing and reciting poetry was a highly developed art form in Spain; Jews and Moslems studied each other’s verses and incorporated the others’ vocabulary, rhythm and poetry styles into their own. Both Arabs and Jewish poets were entertainers who were invited to perform their new poems at private and public events. Evenings were spent listening to the works of the best poets, much like we go to the movies today.

Yehuda  Halevi soon became one of the favorite poets of his people. One of his most famous and beloved poems, "My Heart is in the East" expressed his longing for Jerusalem, the ruined yet holy site of the Temple.

Later in his life Halevi moved to the Spanish city of Cordova  which was a Muslim city at the time. Although he had an honored position as a physician, he did not feel at ease there. Over time, his yearning for the Holy Land grew deeper. After the death of his wife, the elderly Halevi decided to set out on a journey to Palestine.  Leaving behind family and friends, they discouraged him from taking the long and dangerous journey. But there was only one image in his heart—Jerusalem. After a stormy passage he arrived in Alexandria, Egypt and then, despite pleadings of his friends not to continue, he started on the difficult land route once taken by the Israelite wanderers in the desert. It is related in stories about Halevi that as he came near Jerusalem, overpowered by the sight of the Holy City, he sang his most beautiful poem to Zion and died there shortly thereafter, never returning to Spain. Halevi remains one of the most celebrated poets of his time.

Sources: http://www.jewishencyclopedia.com/articles/9005-judah-ha-levi and Jane S. Gerber, The Jews of Spain, 1992.

My Heart is in the East 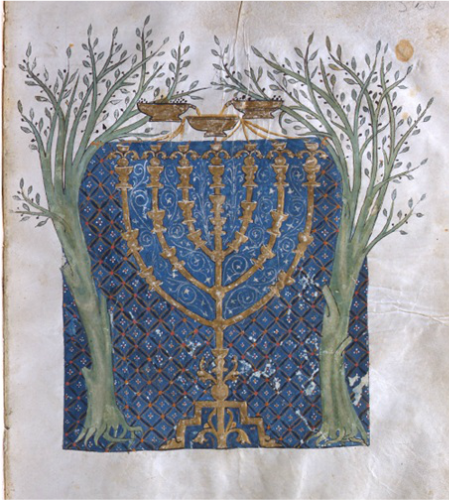 My Heart is in the East
Yehuda Halevi

My heart is in the East
But the rest of me is in the West--
How can I savor this life, even taste what I eat?
How, in the bonds of the Moor,
Zion chained to the Cross,
Can I do what I've vowed and must?
Gladly I'd leave
All the best of grand Spain
For one glimpse of the ruined shrines's dust.
Questions to Explore
Activity #3--Medieval Jewish Manuscripts:  Written, Illustrated and and Created by Hand.
In Medieval times, every book was carefully created by hand.  Picture a time –indeed centuries of human history without any kind of printing press! It’s easy to imagine how skilled scribes, from many different cultures, would naturally feel the urge to decorate their hand-written word with visual art. The images helped to guide people through the text. As  ‘illuminated’ manuscripts, it is as if they cast light upon the words and made them more clear.  Specialized scribes, whether Jewish, Christian and Muslim, created unique manuscripts by hand, writing out each letter with ink, and creating colorful paintings around the words to illuminate and decorate the text. Originally the term "manuscript" referred to a document written by hand.

Whatever language the Jews spoke in the Medieval Diaspora, they continued to read and write in Hebrew. Hebrew books from the Bible to a wealth of religious, legal, philosophical, scientific, and literary texts, were essential in the transmission and sharing of Jewish culture, history and creativity.
http://purl.pt/23405/3/#/0
Design and Create an Illuminated Manuscript Page
לִבִּי
My Heart 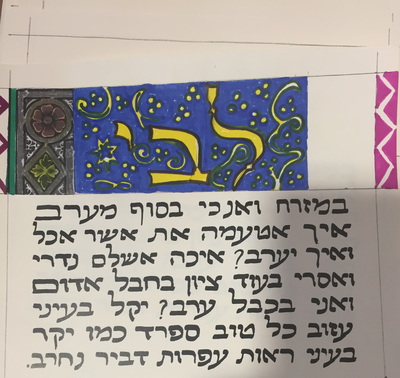 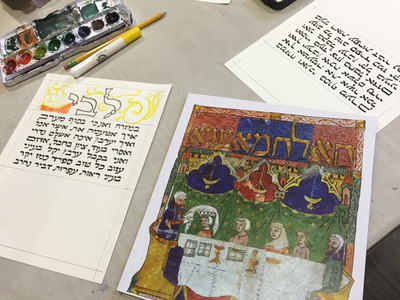 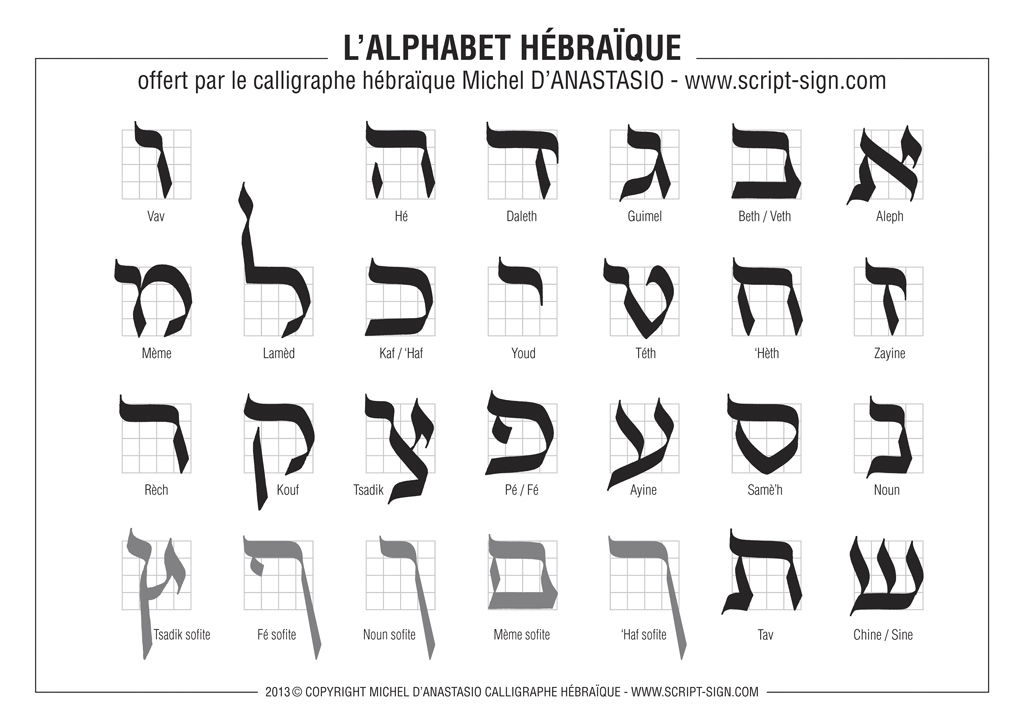 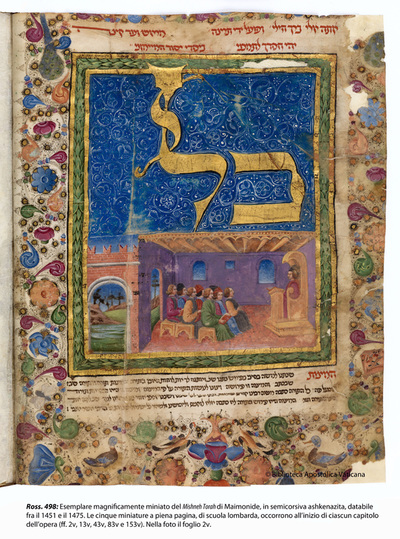 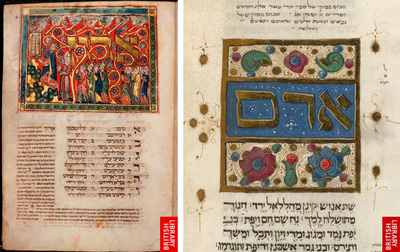 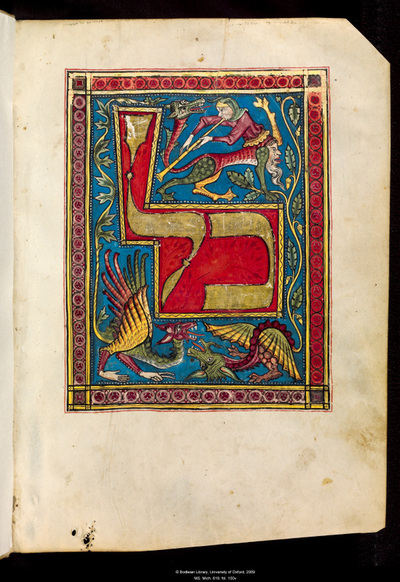 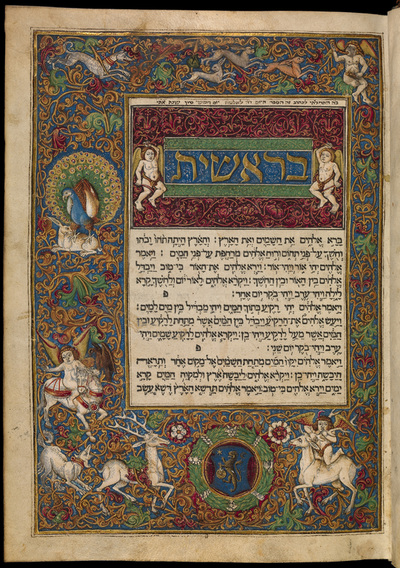 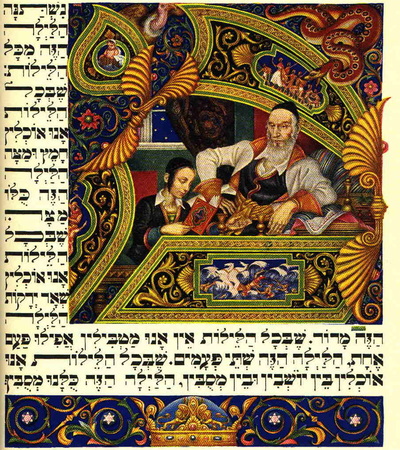 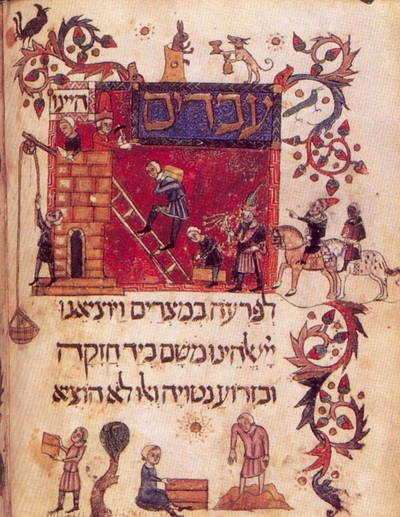 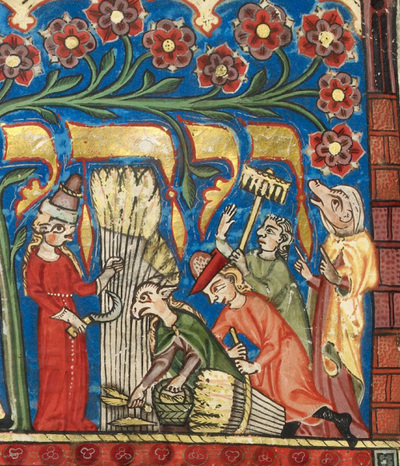 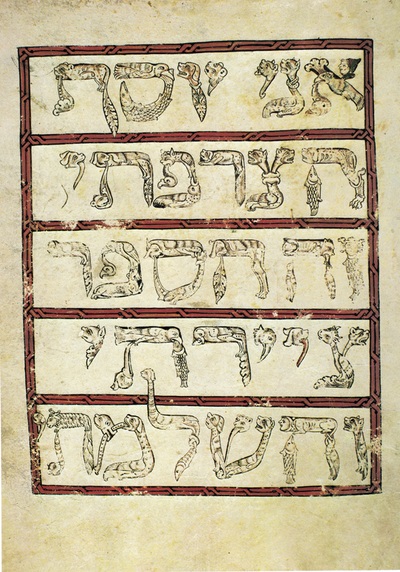